Haneulgung (Heaven Palace) is located in the most auspicious land under Heaven in Jangheung, Yangju city in the north of Seoul.

Facing south the Haneulgung Complex consists of five sections [five elements of pungsu/fengshui theory] in its layout, namely, the central ground, the main mountain in the back to the north, the blue dragon group to the east, the white tiger group to the west, and the frontal mountain to the south.

The central ground is the First Main Building site now under construction. The main mountain is Mt. Goryeong in the background of the complex. The blue dragon group contains three members: the innermost dragon running down toward Suri Peak flanked by two dragons, one running toward Jang’gun Peak and another toward Kkoekkoli (nightingale) Peak and Chel Peak. The white tiger group in the opposite side consists of the inner tiger running toward Hyeongje Peak of Mt. Gaemyeong, and the accompanying tiger toward Eum Peak. Surrounded by 8 peaks and mountains and centered on the First Main Building site, the Haneulgung Complex completes its layout with the frontal mountain, Mt. Ireong, in the south. Mt. Iryeong is in the shape of a reclining cow with Mt. Bukhan in back spread out like a screen.

Overall the topography of Haneulgung resembles the shape of an upside down cabbage or a miniature Korean peninsula. It is also in the shape of a female uterus and vagina, which is explained through the directions to Haneulgung. The directions are: From the Jangheung Town Office come northbound on Route 371; Turn to the left to Seokhyeon-li; Enter to the narrower road; Go over the Stone Hill Pass; and See the entire view of Haneulgung. Of these directions the Rout 371 corresponds with the vagina, and the Stone Hill Pass, with the entrance of uterine neck. Before the roads were constructed the entrance to Haneulgung was hardly noticed by passers-by.

The ground of Haneulgung has abundant water. Water flowing down from Mt. Goryeong flows all year round. This water runs southwest to the bottom of Mt. Iryeong, where it joins the Iryeong valley. Mt. Goryeong (高嶺山) by its meaning is the place where high spirit resides. Mt. Gyemyeong (雞鳴山), meaning the place of cocks crow, was later renamed as Mt. Gyemyeong (開明山) meaning the place of bursting brightness. Mt. Iryeong (一靈山) means the place of a spirit enclosed. The vicinity of Haneulgung is wooded with nut pine trees providing yang energy on one half and with broadleaf trees providing yin energy to balance the land.

In sum, Haneulgung’s topography is shaped by two prominent features combined. They are the commander of ten thousand generals, and the uterus to conceive a fetus to become the Emperor of the world. Undoubtedly it is the greatest lot under Heaven. 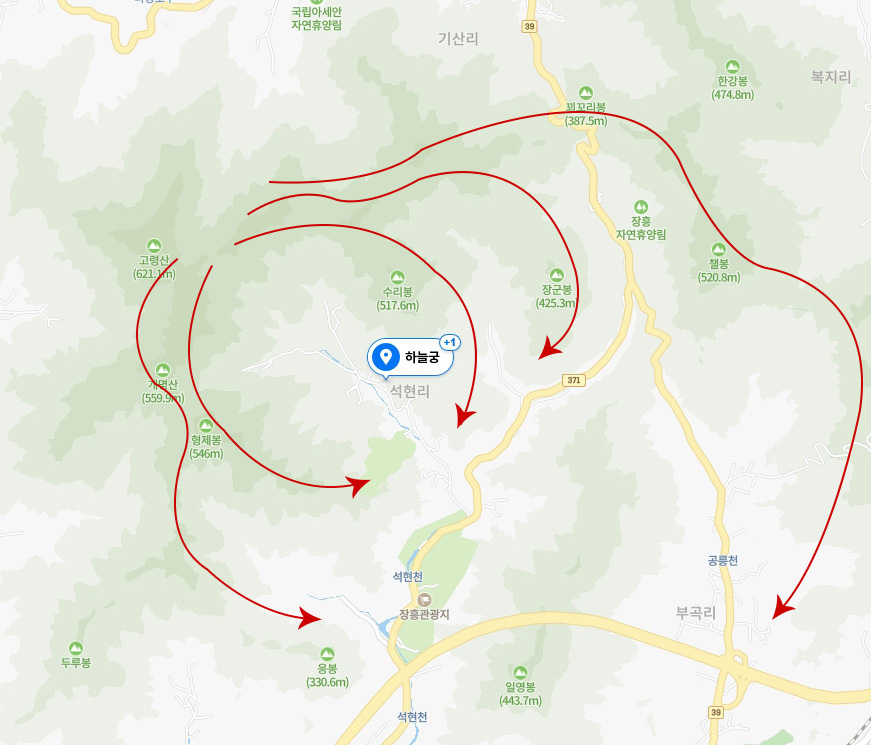